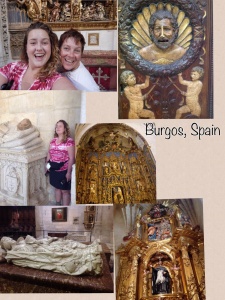 Hanging in the cathedral 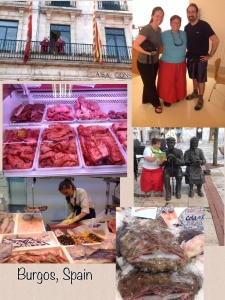 Checking out the morning sights

Last night as we were sitting in the kitchen area of the huge Albergue, two people came over to ask if I was, Shawna. Turns out, Liz and Alek are following me on the American Pilgrim site and are fans of mine. Oh my gosh…I’ve got groupies!

It was nice to sleep in without having to hurry and pack up and get out by 6:30 am. However, a woman decided that 4 am was a good time to take a shower, which was located not to far from my bed!

We packed up and moved to another Albergue- Divina Pastora down the street from last night. It too is 5€ for each of us. We were escorted by one of the hostel workers. Something got lost in the translation. He thought we wanted our bags transported when we wanted them stored…ahhh! But anyway, we came and got a bed, but not before the owner looked at us and translated to another guy who translated to us, that we were too fat for the top bunks.

Someone broke one of the top bunks last night due to being too heavy and the frame bent. I took a picture of it. We are real careful about bunk bed safety as is. I get to sleep on a bed mat on the floor next to Abby. Fine with me.

Then as we headed out to watch Burgos wake up on the morning. Most pilgrims are gone by 7 am. They hit the road early to beat the heat of the day. But we got to enjoy watching what happens in the morning. For instance, a duo, dressed up in fancy cloaks, came out onto a terrace and played their horns a couple of times. Some kind of official morning ritual? I don’t know, but Abby and I were the only ones in the plaza who witnessed this performance. We videotaped it. How cool is that?

I got my hair cut at the salon. That was fun trying to explain that I wanted shorter hair, but not too short. The woman really did give my head a scrub. We went and visited the market place. We got to stand and watch all the different parts of animals placed out to be sold…pig noses, bull balls, very tongue imaginable, pig lungs, pig feet and ears…very fascinating watching the fish woman gut a fish. We meandered around the whole place taking in the sights, smells and sounds. Then we spent two hours touring the cathedral. Abby wouldn’t take a picture of me laying on the ground next to the sarcophagus. She said it wasn’t appropriate.

Now we will take a nap and go find some churros and chocolate.

This is how we do the Camino. Slowly, but really soaking up the experiences. 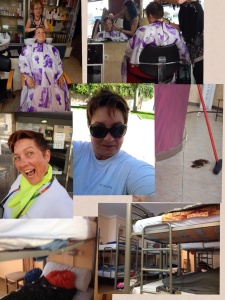 2 thoughts on “Slow Down, Take it Easy”

This site uses Akismet to reduce spam. Learn how your comment data is processed.